Dr. R. Swami Narayanaswami was Chairman and Managing Director of CSM group of Companies from the incorporation of CSM Software Private Limited in Bangalore in August 1992 till the group companies were sold in May 2016. The group companies included: CSM-India with headquarters in Bangalore, India and offices in major cities of India with a subsidiary office in Germany; and, CSM-USA with offices in Westlake Village, California and in Livonia, Michigan, USA with a wholly-owned subsidiary in India, CSM-Vigyan, in Bangalore, India. Born in Tripunithura, Kerala State, he had his high school education in the Boys’ High School, Tripunithura, the 2-year college program known as Intermediate level studies from Maharaja’s College, Ernakulam, the Bachelor’s degree in Engineering from the College of Engineering, Trivandrum, the M. Tech degree from the Indian Institute of Technology, Madras and the Ph. D. degree in Civil Structural Engineering from the Texas Tech University in Lubbock, Texas, USA. He was selected for the prestigious U. S. National Science Foundation – National Research Council Post-Doctoral Fellowship to conduct research for 2 years at the NASA Langley Research Center in Hampton, Virginia, USA. He spent a further 3 years as Research Scientist at Nasa Langley for a total of 5 years’ research at NASA.

Dr. Swami, as he is known in the scientific community world-wide, started his career as a Lecturer in the College of Engineering, Trivandrum and served the then two Government Engineering Colleges in Kerala State, at Trivandrum and at Trichur, for a total period of seven years, first as Lecturer and later on as Assistant Professor. After obtaining his Ph. D. degree from Texas Tech University, Lubbock, Texas, he was a Post-Doctoral Research Scholar and was one of the scientists who originally worked with NASA on the development of NASTRAN (NASA Structural Analysis program) codes in the early 1970s. Besides NASA, he has also worked at the Rockwell International Corporation (presently, part of Boeing Company) where he was involved in the internal load analysis of the original B1 bomber program in the mid-1970s. He was a principal scientist at the MacNeal-Schwendler Corporation and was involved in the development of advanced capabilities for the MSC/NASTRAN software code. Dr. Swami has distinguished himself as an able and esteemed trainer on the theory, engineering, programming and user aspects of the NASTRAN software code. He has delivered over 100 seminars worldwide to engineers in world’s leading corporations in USA, Japan and Europe (Boeing, Northrop-Grumman, Lockheed Martin, GM, Ford, Toyota, Daimler-Benz) on various topics around engineering analysis and design issues in the Statics, Vibrations, Dynamics, Optimization modeling and analyses. He was the founder-President and CEO of CSAR Corporation and developed the state-of-the art CSA/NASTRAN code, the early pioneer codes for Structural Optimization of CSAR/SIZING2 and CSAR/OPTIM2. CSAR Corporation was acquired by MSC in 1999. He is an internationally recognized researcher, developer and educator in the field of Finite Element Analysis (FEA) and Computer Aided Engineering (CAE).

Dr. Swami is a voracious reader and his collection of books includes books in history, philosophy, spirituality, management, economics, current affairs etc. During his leisure hours he engages himself in writing travelogues, listens to Carnatic music and lectures widely on ethics and management issues. Dr. Swami is an exceptional mentor which is evident from the fact that he was the pioneer to propagate the use of Engineering tools and technology in USA and Europe in the early 1970s in his role as NASTRAN seminar instructor and in India in the early 1980s. His mentoring of engineers and scientists in CSAR Corporation and at CSM has produced many leading technologists and managers in the industry.

He married Ms. Sarasa Parameshwara Iyer in July 1969. Sarasa had a Master’s degree in Mathematics with specialization in Statistics from the Kerala University and was teaching Mathematics at the CMS College, Kottayam, Kerala. Shortly thereafter, he came to USA in August 1969 and Sarasa joined him in USA later that year in November. They both were graduate students at Texas Tech University in Lubbock, Texas and both graduated in 1971 August, he with his Ph. D. degree in Structural Engineering and she with her second Master’s Degree in Mathematics, this time with specialization in Numerical Analysis and Computer Applications. Sarasa worked in the State school system teaching Algebra and advanced Mathematics courses because that allowed her to have vacation at the same time as their children in the school system had vacation. Later, she joined their software development company, CSAR Corporation, first as a computer programmer and later moved into Finance and Administration, eventually rising to the position of Director of Finance and Administration. She managed the finances of CSAR Corporation and successfully negotiated the due diligence operations and completed the transactions of CSAR sale to MSC Corporation. Presently she serves as the Director of Finance for the CSM group companies in USA and India. Their son, Dr. R. Sekhar Narayanaswami, Senior Technical Scientist, in a start-up company in the Silicon Valley, Mountain View, California, USA, is married to Monali (presently Business Development Manager at Google in Mountain View). Their daughter, Attorney Kala Sarvaiya, a Patent Attorney in a Patent Law Firm in Westlake Village, is married to Mr. Kirit Sarvaiya (presently Executive Director of Technology Finance at Myspace in Los Angeles). Sarasa and Dr. Swami spend time with their 4 grandchildren, Meena Narayanaswami & Naveen Narayanaswami and Nikhil Sarvaiya & Usha Sarvaiya.

Besides managing the affairs of the CSM group of companies, Dr. Narayanaswami spends his time in the study of world religions and philosophy. He teaches Vedas and Upanishads to his friends and students, lectures on topics in science and spirituality and writes short articles on these topics and on travelogues that he has undertaken. His talk on Science, Religion and Spirituality and his travelogue on Char dham, the four places of worship for Hindus, are available elsewhere on this website. 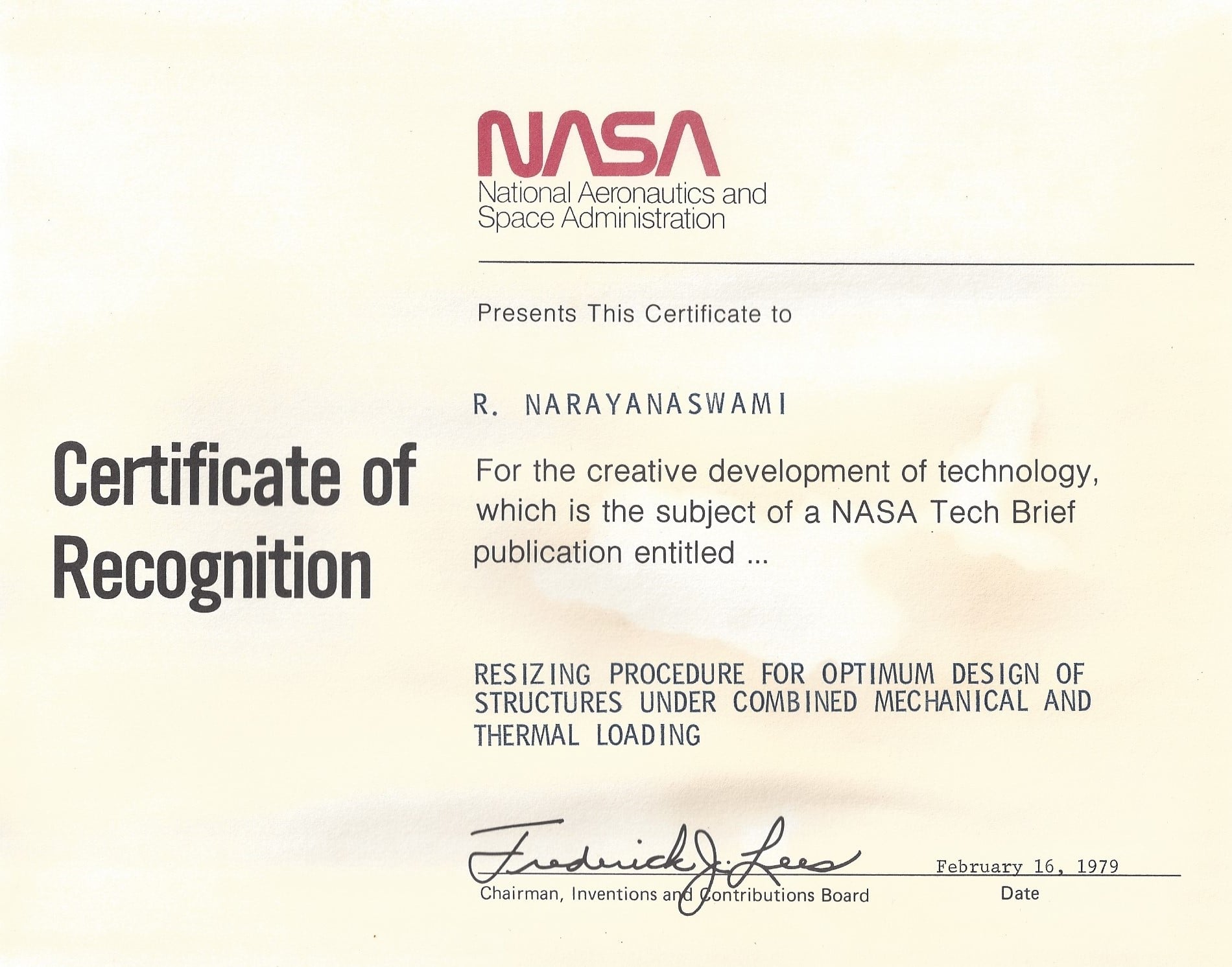